Beginning with the 2012 football season, St. Patrick School made a big decision to begin playing 8-player football.  It was a move that has provided much excitement to the Portland area as the Shamrock football team has been successful year after year.   Because of the success of our program and due to the low […]

Beginning with the 2012 football season, St. Patrick School made a big decision to begin playing 8-player football.  It was a move that has provided much excitement to the Portland area as the Shamrock football team has been successful year after year.

Because of the success of our program and due to the low number of 8-player football teams in our area, scheduling has been a challenge for our athletic director and varsity football coach Pat Russman.  The Shamrocks have continued to do much travelling, even making several trips to Michigan’s Upper Peninsula.

While many schools might not be impressed with the amount of distance their football team has to travel, the Shamrock faithful seem to have embraced our many journeys. They take these opportunities to get away with their families for some quality time and to sightsee around our beautiful state.

This past weekend was no different with a two-and-a-half-hour trip to Manistee to play Manistee Catholic Central. Many of our school families chose to stay at hotels in town, camp at an area campground, or stay in a cabin. With Michigan’s colors reaching peak, many were treated to a spectacular display of colors on the drive north.

When I reached the game, I discovered there were at least as many Shamrocks as the hometown crowd, despite the fact it was their homecoming game. This should not have been a surprise to me. Last fall was no different when we had many more fans than our opponents when we travelled to Bellaire for a game. Even when we played as far away as Engadine, our fans outnumbered the home crowd at least four to one.

Right from the onset, we have travelled to places up north such as Engadine, Onekema, and Marquette, and there have also been trips down to some of our southern areas of the state such as St. Joseph. All of these games are viewed as an opportunity to get away, sightsee, learn something new, and spend quality family time while supporting their sons’ endeavors on the football field or their daughters’ endeavors as they cheer on the sidelines.

It has been surprising to note that it is not just parents and our student athletes that make these trips to watch our team play. It is not uncommon to see parents, grandparents, aunts, uncles, other family members, alumni, and friends attend the games and cheer on the Shamrocks.

Finally, our school spirit and the sportsmanship of our football players has been noted by many of our opponents over the years. When we went to a game in Engadine early in our 8-player career, one of their fans commented that “the Shamrocks brought more fans to the game than we have people living in our entire county.” The sportsmanship of our players was noted again this week when the coach of MCC posted the following on our Facebook page: “Great game Shamrocks! You played like gentlemen warriors and showed the most class that we have seen in some time. Good luck the rest of the season.”

Eight-player football has been a blessing to St. Patrick School by providing our students and our school families with many unforeseen opportunities as well as much success on and off the field. Over the past eight seasons, our teams have played in the semifinal game on four occasions and twice reached the state championship game. Our teams have also consistently been academic all-state, with multiple top ten finishes as well as placing first in the state one year.

We look forward to the remainder of the 2020 football season and to the many games that lie ahead for our football program, and all the future opportunities this will provide for our students and our school families. 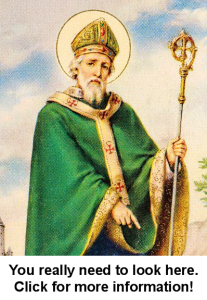